Trapped atomic ions and neutral atoms provide exciting possibilities for realizing scalable quantum information processors (QIPs). The qubit is represented by a pair of internal states of these atoms, and most of the qubit manipulation is performed by using laser beams. In a traditional experiment, the laser beams are aligned to the atomic systems using conventional optics holders on an optical table. Flexible beam shifting capabilities are needed to individually address a large number of these atomic qubits in an array. Traditionally, acousto-optic and electro-optic deflectors are used to provide this capability. In our research we utilize micro-electromechanical (MEMS) technology to provide highly flexible, multiplexed beam steering capability over a wide range of optical wavelengths.

MEMS-based beam steering has been widely developed for optical communications in last 1990's and early 2000's. The requirements, however, were very different for those applications. For QIP applications, the speed at which the beams must be shifted is a critical parameter. In our research we target the settling times for the beam steering to be on the order of a few microseconds, consistent with the timescales over which the atomic states remain quantum mechanically coherent.

MEMS-based beam steering system starts with a set of tilting mirrors, where the beam tilt is converted to a lateral beam shift using a Fourier lens located a focal length away from the MEMS mirror. In our approach, the x- and y-tilts are provided by two separate mirrors, each providing the steering function in one direction. The tilt motions in the two directions are optically combined in an innovative optical imaging system. 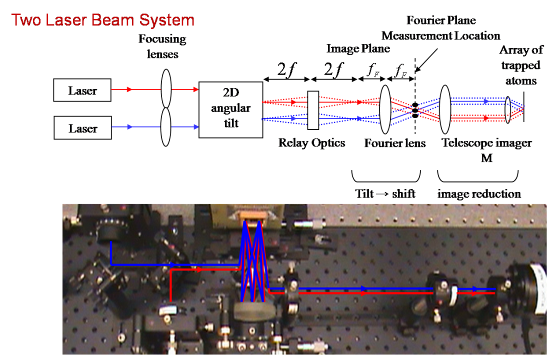 Figure 1 shows the schematic of our beam steering system. This system is capable of independently controlling two beams over a lattice of 5x5 sites with beam steering times of better than 10 microseconds. The project is jointly developed with Dr. Felix Lu at Applied Quantum Technologies, Inc.

We have collaborative arrangements to where our systems will be put to use in real atomic physics experiments. Dr. Didi Leibfried at NIST in Boulder has a system that will enable a real-time monitoring of their ions as they are transported on a chip, as the laser beam that excites the cycling transition for state detection follows the ion as it is transported. Prof. Mark Saffman's group at University of Wisconsin will apply our system to the 2D atomic lattice of Rb atoms they are working with. In the future, this technology will be applied to constructing a system capable of addressing atoms in a 3D lattice, in collaboration with Prof. David Weiss at Penn State University.